I Moved to LA to work in Animation: Comic Review

“I Moved to LA to work in Animation” Comic Review

I usually don’t write book reviews or have much time to write animation related resources review as much lately but today when I happened across Cartoon Brew’s article on “If You Are Thinking Of Starting An Animation Career in L.A., You NEED to read this comic”  It talked about a must read comic by Natalie Nourigat called “I Moved to LA to work in Animation”. for others that plan to move to LA for  animation career.

It seemed interesting but I wasn’t thinking of moving to LA anytime soon but as the executive director of ASIFA-SOUTH animation society (South US chapter), I put the resource up on our community page and didn’t think much of it. Then tonight during our monthly creative mixer, one student artist brought up that she was interested but didn’t want to spend $10 on it. I raised an eyebrow and thought to myself $10 isn’t a lot of money for intellectual property but then I had to remind myself that I was working and we’re talking about students that have student loans to worry about on top of working part time to support themselves.

Therefore, I came back home tonight and bought the book to see if it was worth recommending. I also happened to receive an email tonight a little later as well from my mentor who works at Sony Broadcasting (a veteran TD who has numerous feature film credits and an amazing mentor I look up to and respect) and he sent me a link to the book as well saying “really fun – I lived in LA to work in animation comic” with a link to the comic. Now my mentor doesn’t usually frivolously recommend resources as well and has limited time for responses so this in itself should be a testament to the comic itself though I totally emailed him back to say I already bought it. 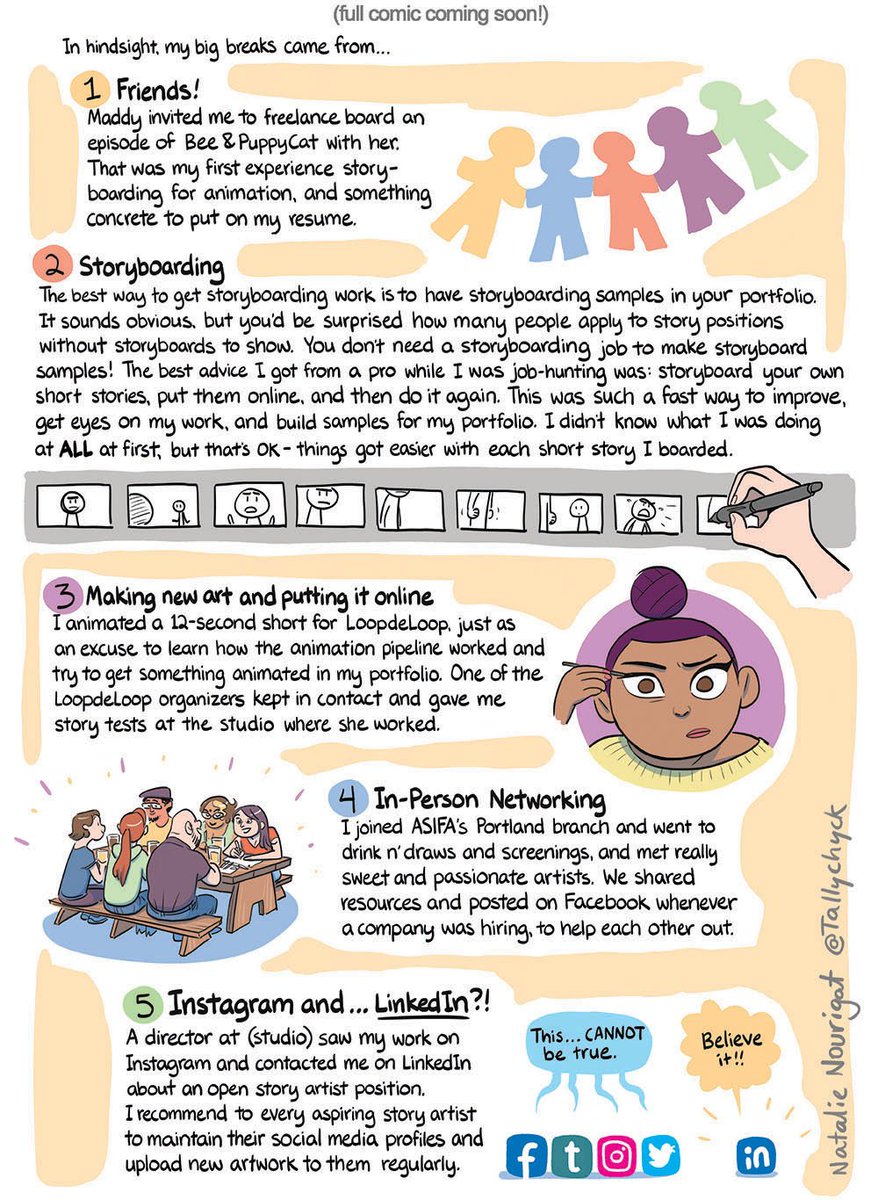 If you want to skip the notes, the verdict is to GET IT even if you don’t think you want to move to LA but want to work in animation.

Is it only for people that want to work in animation in LA?

What I liked about this book was it was insightful and mentioned things to think about that were also specific examples. It touched everything from how the Union works, the  rates, finding an apartment and what Natalie would or would not do again, networking tips with location recommendations, as well as difference between boarding for features and TV show. It was easy to digest and had a heart to it that was a charming read. She doesn’t claim that this experience will be the same for everyone but in fact states that it is merely her experience but also for an artist who was working on sequential comics in Portland, it does contain vital information to think about that is transferable even if you are for example thinking of going to other locations (granted it won’t be the same variables but will make you think about researching your transportation options, lifestyle, and choices that factor into moving to a location and hoping to get a job later or trying to get one first before moving). I also like how she discusses hiatus or that break in between that you have in production. It’s also not too dense and have just the right amount of info to digest but enough to trigger those looking in the right path to search for more information that might answer their questions (such as union rates as there is a whole website with a pdf of that on the animation guild (TAG) website)

The answer is an absolute yes. Other than the obvious support of intellectual property and helping another creative in the industry get direct revenue for their content, this book attempts to answer (and does it very well) the basic answer creatives trying to break into the animation industry ask along with having tips directly related to the industry that I have seen sometimes are more or less lacking in the education sector due to it dealing more with street smart scenarios. Should you pirate the book? Absolutely not. Long term wise you are hurting the content creators and by simple logic, if you spend your own time creating a piece of work  only to have it pirated, it wouldn’t feel nice now would it?

Is this only for animators?

No, in fact Natalie mentions that she is a story artist so this has a lot of focus on being a story artist. If you are a VFX person for example, certain things may not able to you but nevertheless it is a good read in general to trigger some food for thought to seed ideas on what you might want to research about.

Does that mean it is only for those that want to be a story artist/ storyboarder?

Absolutely not. It covers generally the path of the animation industry and information is valuable generally and not limited to story artist path although someone who wants to be a storyboard artist will find this extra valuable for the information and extra insightful. On the last page, other than her social media links, she also has a recommended link for resources as well.

It is quite interesting as the more people I talk to including those that are head of studios, veterans in the animation and VFX industry, academic world, intermediate animators, those in the game industry, and students and non-traditional self taught students that are looking to break into the industry, I notice at least to my best extent of my network that there is a disconnect in the thoughts from one group to the other. While certain parties are thinking the trend of animation is a certain way, others think completely differently and it’s not always because one has more insider knowledge than the other but also the type of people they hang out with and what benefits they may be privy to. I don’t know where the trend is heading as much as having the feeling that as technology advances, things are already moving towards real time pipeline and towards automation and faster/ cheaper.

Is having a job in the animation industry considered a “career” and how many lucky few will find themselves in a long term position as to studio hopping is one that still holds an interesting answer. Networking is definitely one thing and once you get your foot into the door, it can get easier to lead to other jobs. Still, one thing to think about is after the day is done, most artist and creatives will not own their own intellectual property if they are not working on their own creative projects on the side. If you are satisfied with your work, that is good but it is always encouraged to think about the trend of today’s technology and platforms that allow for content creators to directly reach their audiences such as Paetron or other crowdfunding methods that allows them to hold license over what they create. Research is always encouraged not just in the field of animation but learning about e-commerce, how to monetize through content creating, and how to form your own business entity.

*This article contain is a reflection of the Needy Animator’s opinion and  musing and may not necessary reflect those of others. Images shown are only used in reference for explanation purposes and belong to their respective owners. This review has not been paid for and is in no way associated with the artist.

This site uses Akismet to reduce spam. Learn how your comment data is processed.